Something About a Swing… 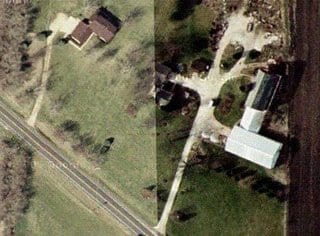 Audrey and I took advantage of the unseasonably warm weather today. Only in St. Louis could it be 10 degrees one week and 75 degrees the next! After a nice afternoon nap, we headed out to the backyard for a little bubble blowing and swing set playing. Last fall, one of Justin’s co-workers offered us her swing set since her children outgrew it. It has since become one of Audrey’s favorite things to do. She loves to climb up the ladder and go down the slide, but her favorite thing is the swing.

Audrey didn’t like the infant swing when she was a baby, but she now has more than made up for the lack of early swinging in her baby days. As often as the weather allows, we make good use of our swings. Audrey matter-of-factly instructs me to sit on the “big girl” swing, while she gets settled in hers. We swing side-by-side, singing and chatting about what we see and hear in the great outdoors of our backyard.

Maybe it was the musty smell of early spring in the air or the rythmic motion of our swinging, but whatever it was I found myself going back about 20 years to the days when I would swing for hours, lost in my own thoughts and dreams. I remember when I was about 8 years old, we lived in a historic stone farm house out in the country in Huntley, IL, where my Uncle Clark and his family now live. This house was built in the 1800’s and was one of the first, if not the first, to be built in McHenry county. To this day, it has a gold plaque by the front door stating it’s historic significance. It’s out in the middle of farm fields and during the summer I would wake up and run out to our neighbor’s swing set to swing. Even that young, I was a very reflective girl and I would litterly swing for hours while I just thought about different things. I can see the white, fluffy dandelions sprinkled throughout the green grass, hear the sound of the wind rusling through the planted fields, and smell the crisp, fresh counrty air that enveloped me. I remember singing “Oh, What a Beautiful Morning” from the musical Oklahoma every morning while I swung. I guess even as an 8 year old girl, I recognized the beauty and serenity that I was experiencing on those quiet mornings.

The stone patio that was tucked back around the corner of the house.

My tiny, yellow room that you had to step down into.

Cuddling with my sisters and parents because the house was so cold and drafty in the -0 degree winter months. Before the front room was fixed up, we actually had a plastic sheet hanging between that room and the kitchen to keep out the draft that would come in!

The mice that would run across your pillow, peak out at you from behind the TV, or jump out of the sweater that my Aunt Beckie was trying on – I don’t think I’ll ever forget seeing her standing on that kitchen chair yelling blood-curling screams!

The dirt floor basement with antique treasures that I so wish I appreciated more back then!

The steep, narrow stairs we used to slide down in our sleeping bags. And the old man who showed up one day because he had lived in the house as a boy and remembered one of his parents teaching him to tie his shoes on those very stairs.

The old barn with the holes in the floor to throw down bales of hay. Watching my dad climb up into the silo.

Riding bikes up and down the long lane and in the massive white shed where the tractors were stored.

The horses and cows that lived in the barn. I’m pretty sure we named most of them, though I can’t recall now.

The massive oak and pine trees that were hundreds of years old.

My cousin, Gary, climbing up on the white, stand-alone cabinet in the kitchen in the middle of the night and a glass coffee pot falling and breaking on his head.

The jingle that my mom made up so we could remember our address. I STILL remember those jingles. I’ll never forget the addresses for the homes where I lived as a kid! Ask me to sing them for you sometime!

Our cocker spaniel, Sammy, who was run over by a car. I remember exactly how it happened. We were driving up the long lane returning from church and a strange car was sitting there. Two high school kids got out and went over to talk to my dad. I remember my dad coming over to us with a very sad look on his face and telling us that Sammy had been hit. It turned out that those kids were students at the high school where he was the dean. As I look back now, I think what integrity they must have had to stick around to tell a family they had hit their beloved dog. Dad buried Sammy in the field behind our house. After that, I’d look out into that massive field and imagine Sammy there watching over me. 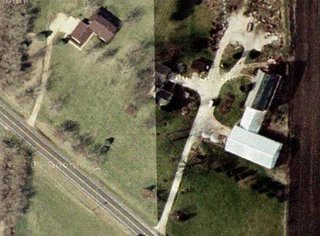 There are so many things about that old house that I loved. And even though we only lived there for 3 1/2 years, there’s something about living in the country in an old home that made a lasting and unique impression on my soul.

Don’t get me wrong, I love the house we have now. I have put a lot of love and effort into making it a place that our family can call our own. But there’s truth to the phrase “walls can talk.” When you live in a home that has seen so much history and housed so many hopes, dreams, fears and sorrows, it seems that a part of each of the former residents remains. I don’t believe in ghosts per se, but I do believe that a home can retain some aspect of those that lived within its walls. There’s a mystery in knowing that so many lives were lived in that space. It fosters feelings of intrigue and creativeness (especially for a child) that a modern home just doesn’t have. I hope that somehow we can give Audrey a little taste of that kind of life – a reverence for those who came before us and a passion to live for the simple things. I haven’t thought about these memories in years…funny how a swing on a lovely, warm day can bring it all back…