Date with Destiny – Part I 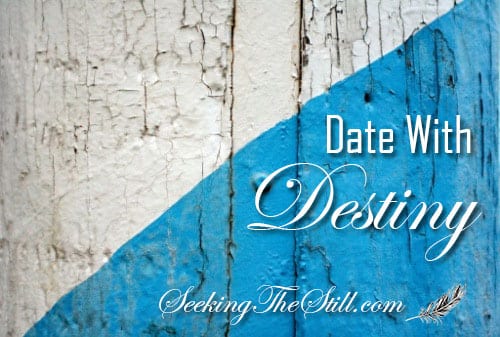 If I made a different decision, could I have avoided it all?  Avoided the pain?  Avoided the breakdown?  Avoided the trauma?  I ask that question of myself many times.  For a myriad of reasons, I am confident the answer is no.  Perhaps I could have staved it off for a time, but my landslide was coming.  It had to come.  My date with destiny had arrived.

The time was early fall 2014.  I sat in a meeting at the girls’ school. I am part of the marketing team, a volunteer group of staff and parents who advise on ways to promote the school internally and externally.  We had a problem on our hands.  No one had volunteered to chair the school’s annual auction.  Held in the spring each year, the auction is the primary fundraiser for the school.  It is a big deal.  The event raises anywhere from $80,000-$100,000 and a large portion of that income is included as a line item on the budget.  Without an auction, we were in trouble.

At this time of the year, the planning should have been picking up steam, but without a chair person, we had nothing.  And the clock was ticking.  That’s when the little voice in my head piped up, You could do that, Laura.  You could chair the auction.  I admit that the idea was equally intriguing and frightening.  Ironically, I distinctly remembered sitting at the auction the previous year and thinking, I’m so glad I have nothing to do with the planning of this event!  It is a complex deal with as many logistics and moving parts as a political campaign.  And yet, there was this part of me that suddenly wanted to take on the challenge.

The achiever/perfectionist/people-pleaser in me was quickly giddy with the potential of leading such a huge endeavor.  I could take this on and do it as it had never been done before.  The soft-spoken voice of reason, on the other hand, had a few concerns.  I knew my husband, Justin, likely would not be on board.  I had taken on too much responsibility in the past, and it always put a strain on our relationship.  But for every yield sign that cropped up, a creative idea also sparked in my mind.  In fact, it was as if the creative portion of my brain was lit up with flood lights.  Without any effort at all, a theme came to me, Mission Possible.  I could already see the James Bond imagery reflected in artwork and other visuals.  Your mission, if you should choose to accept…from there the ideas just kept flowing. Almost too quickly for me to keep up.  If ideas were coming THIS freely, it had to mean I was meant to take this on…right?!?

I initially pitched the idea to Justin as a team effort.  He can rock a spreadsheet like nobody I know. Without a doubt, he would be an excellent co-pilot.  The problem was, he didn’t bite.  Justin had recently started a new job that involved international travel.  Lots of it – being gone for three weeks at a time, several times a year.  The girls and I had survived his first two trips the previous spring and summer.  While we missed him terribly, we had held our own and made the best of it with special treats like the girls sleeping in my bed and dinners of popcorn and ice cream.  Justin knew his limits and co-chairing an auction with me definitely did not fit within them.  He knows me well enough to realize that it didn’t fit for me, either.  But frankly, I just didn’t care.  The challenge of being responsible for something as big as the school auction had taken hold of my ego and wasn’t about to let go.  The voice of reason didn’t stand a chance.

The next thing I knew, I was sitting in the next marketing team meeting telling them about my idea for a theme, exciting new possibilities, and volunteering to chair the auction for one year.  I don’t know what made me so emphatic about telling them it was for one year only, but the team was just so relieved that someone was crazy enough to volunteer, they didn’t care.  Crisis averted, or so I believed…my husband wasn’t happy about my decision, but he also knew that when I make up my mind about something, I’m like a steamroller with no brakes.

The commitment was made.  The die was cast. The fun was about to begin.

Landslide by Fleetwood Mac
Verse 1
I took my love and took it down
I climbed a mountain and I turned around
And I saw my reflection in the snow-covered hills
Till the landslide brought me down
Next in the Series…Overdrive: Part II – the story leading to my emotional and physical breakdown.  Little did I know that my world was about to be turned on its axis, and I would find myself bruised and broken in a way I never dreamed possible.
← Prev: Make Me Broken Overdrive (Part 2 in the Date with Destiny Series) →