Beware of the Easter Hoppy 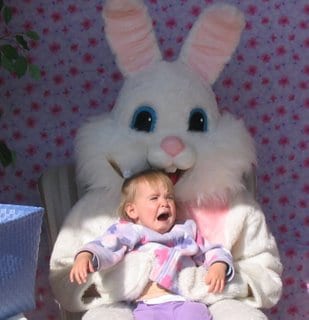 A few weeks ago, Audrey started saying a word that sounded like a mix between “hoppy” and “happy.” I had the darndest time figuring out what it meant until one day I was taking all of the stuffed animals out of her basket. I picked up the bunny and she immediately shouted “Hoppy! Hoppy!” Mystery solved! We still don’t know if she calls them “hoppies” because they hop or because the Easter bunnies at Angie’s house are “happy.” Regardless, thus began the latest obsession.

Everywhere we go, there are “hoppies.” In Target, they are hanging from the ceiling, lining the shelves and even on the clothing. In Audrey’s world, this is like Christmas! Being tired of singing Old McDonald, In a Cabin By the Woods, and the Ittsy Bitsy Spider, I thought I would take advantage of this newest obsession by teaching Audrey Here Comes Peter Cottontail. I figured… it’s a cute song, it’s about Easter AND about bunnies! No brainer! Sure, Laura, great idea. Now we sing the hoppy song endlessly for fear of a breakdown. No sooner do you finish it, then the little hoppy lover squeals, “hoppy, hoppy” as she jumps her fingers up and down in an effort to make a bunny hop. It’s actually very cute the first 10 times. After that, it’s enough to frustrate even the most laid-back person you know.

Anyway, for the culmination of this obsession, we thought it would be a GREAT idea for Audrey to go sit on the Easter Hoppy’s lap for a picture. We talked about it all morning and she was so excited to go visit the big hoppy! I really thought that with her love for bunnies, this would be a great treat. Wrong, again, mom. 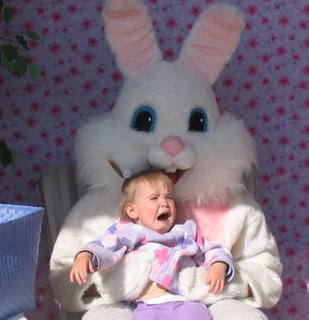 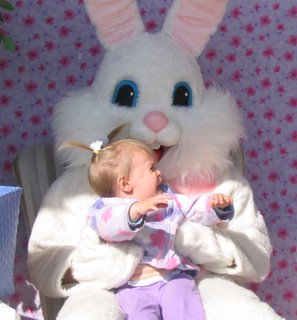 She was facinated with the giant hoppy for, oh, about 30 seconds before we attempted to remove her clutching arms and clinging legs from Justin’s body long enough to put her on the Easter Bunny’s lap. The only saving grace was that she got an Easter egg with chocolate in it. As chocolate tends to do, that yummy treat was enough to erase any traumatic memories, so the Easter Hoppy is once again a dearly beloved friend. Long live the hoppies!