An Elmo Cake to Remember 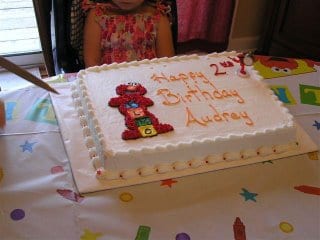 We celebrated Audrey’s 2nd birthday with over 30 family members & friends (including Aunt Amy all the way from Pheonix)! When I originally took her to the party store to pick out a theme, it was a close decision between Strawberry Shortcake, Elmo & Winnie the Pooh. Elmo won that day, so an Elmo celebration it was! Audrey talked about her Elmo party for weeks leading up to the big day even though I’m positive she had no clue what it really meant. One thing she did know was that there was going to be an Elmo cake! She wasn’t disappointed! 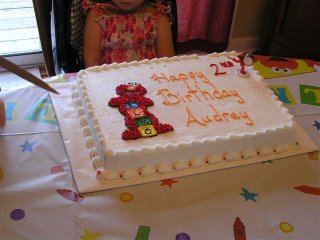 Just having returned from our vacation in Michigan (I know, I know, I haven’t written a post about that yet, either) I was feeling the crunch to get things ready, so my parents came over a day early to help out. We had water games planned for the kids, snacky foods and lots of Elmo decorations to create a festive atmosphere. With so many family members & friends attending, it was a great day. Audrey was a fantastic little host. She was a bit overwhelmed with 30 people staring at her, singing Happy Birthday, but she recovered nicely and blew out the candles in the very first attempt! Tammy made the yummy Elmo cake and it’s still a favorite Audrey subject almost a month later! 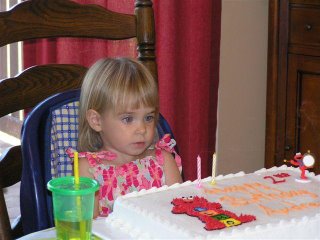 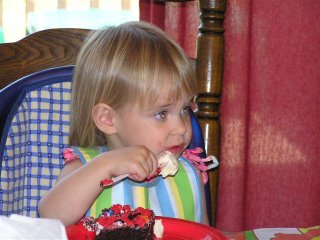 Audrey really got into the gift opening this year. Of course, she immediately wanted to open each toy and had to be prodded to keep opening the other presents. She dutifully thanked each giver with a hug & kiss after each gift was opened with a sweet little “day do!” A crisis was narrowly avoided when Aunt Sarah had to make the big Elmo gift bag go away because Audrey was afraid a Big Elmo was hiding in the bag and was going to come out and get her! 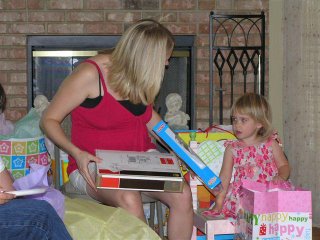 After the gift giving celebration, the kids ventured out to the back yard for water games, sprinklers & the pool. For an August afternoon, the weather was actually very nice, especially in the shade. Audrey was her typical shy self, preferring to stand back a little and watch more than actually participating as much as some of the other kids…she gets this from me. As you can see from the pictures, the kids had a blast and that’s what counts, after all! 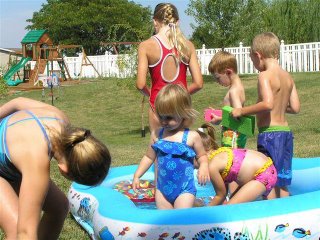 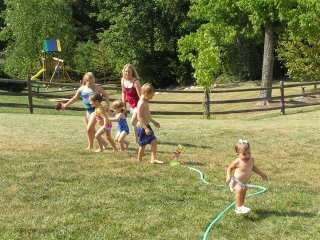 It’s hard to believe that our baby is really 2 years old. She’s growing up right before our eyes. Her birthday may have been filled with food, fun & gifts, but most of all it was filled with lots of love from many. Who could ask for more?